Many of today’s multicultural, multinational corporations have speakers of dozens of global languages on staff. When documents, such as contracts, product manuals, or websites need to be 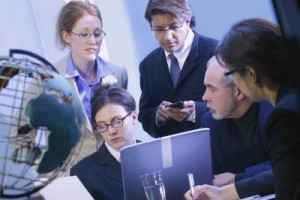 translated into foreign languages, many managers wonder whether they really need to outsource translation or do it in-house with the help of their multilingual employees. These employees understand the company business, and you don’t need to pay them extra. Wouldn’t it be cheaper to do the translation with internal resources?

Translation entails more than simply “speaking” another language. Speaking two or more languages does not qualify a person to be a translator. A translator must be able to convey the meaning behind the author’s words, and to do it in a way that is appropriate to the target market. Translation is an acquired skill of expressing ideas, formulated within the framework of a particular culture and within a specific field, in another language, so that the message conveyed to the new audience remains unchanged. This skill is acquired over many years of practice, after the individual has acquired the necessary basic language skills.

Translation is much more than simply exchanging the words in one language for those in another, just as software design, for example, is more than simply stringing together a group of command lines or software objects.

The translation of documents, particularly in marketing and technical areas, is a linguistic minefield. Not only are the grammatical and structural rules different from language to language, but the all-important element of cultural context can wreak havoc when a literal translation is attempted.

As the old Italian saying goes: Traduttori, tradittori (translators are traitors), few words have one-to-one equivalents in two different languages; so an exact rendering of the original language’s meaning is next to impossible. Interpretation is always involved to a certain extent, and for that, the translator must have both specialized linguistic training as well as technical knowledge.

A word may have many different meanings, as with the commonly used German word Anlage. Depending on the context, this word can be translated variously as: system, plant, facility, equipment, structure, attachment, appendix, exhibit, supplement, asset, investment, feed, rest, bearing, design, pattern, arrangement, cramp, talent, gift, landslide, layout, . . . well, you get the idea.

To further complicate the matter, the use of English has become particularly fashionable in business marketing literature in Europe, particularly in the IT sector (for obvious reasons). The problem with this is that these English words are often used incorrectly, in terms of meaning, grammar and style. For example, capitalization is one area where Germans make many mistakes because of the different grammatical rules in English. False cognates are another. Such errors, combined with a common tendency by non-translators to transfer syntactical structures from the source to the target language, instantly label a text as a poor translation to any native speaker of the language.

A non-native speaker of English living outside the US will not be familiar with all aspects of current idiomatic US English. In other words, although they may be able to carry on a conversation, or even have a very good comprehension of written and spoken English, they will have no Fingerspitzengefühl (literally “fingertip feeling”, i.e., acute sensitivity) for the language, a fact that is painfully obvious to the native-speaking readers of translations by such individuals. Even native speakers who have lived abroad for some time are much less likely to be able to render idiomatically accurate and current translations.

An in-house employee in another country may have the further disadvantage of being unfamiliar with the many technical terms and industry jargon that are currently used in the US.

Terminology is constantly changing, and maintaining consistency both within and between documents is a difficult, time-consuming task. Translators have special tools for terminology management, as well as many specialized reference materials, bilingual technical dictionaries, etc.

Even if an in-house employee were able to produce a passable translation, the time it would take for this person to complete a translation would be greater and the result would be inferior to that of an externally hired professional.

Ultimately, the cost of a poorly done translation is much greater than the savings of using an in-house person “who speaks English,” in terms of both damage to the company image (a poorly written text immediately conveys the impression of amateurism) and the need to revise later versions of documents that were poorly translated the first time around.

Moreover, that multilingual staff person was most likely not hired to translate documents. He or she was hired to do something else. Performing translations takes away time from other tasks, namely those for which this person was primarily trained and hired. This means that the “savings” of using an in-house person are offset by the cost of time spent on additional tasks. The job of a professional translator is to translate, nothing else. A delivery schedule is agreed upon, and a reliable professional will always meet that deadline. An in-house person may be forced to postpone work on a translation because of an unexpected problem on another project, for example. In a highly time-sensitive marketplace, translations (e.g., press releases) that are delivered too late are often useless.

Summary of benefits of hiring a professional translator

In summary, the benefits of hiring a professional translator over using a multilingual in-house person are:

Have you experienced the difference between using professional translators versus relying on multilingual staff? Please share your experiences in the comments section below.